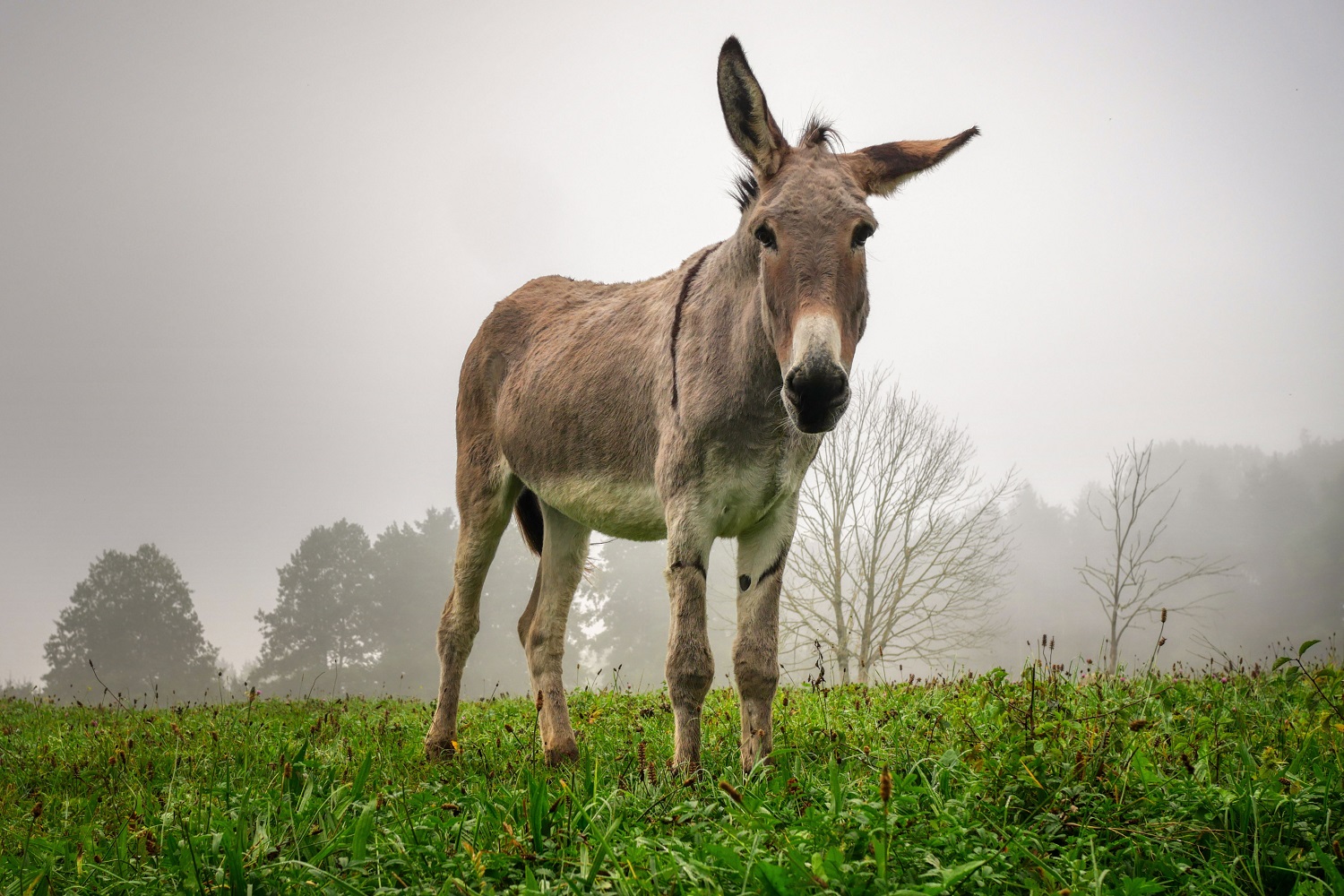 Texas Is a Red State but Dallas is a Blue County

There are Democrats in Texas! We know because we have a lot of them right here in Dallas County.

The last blog posting last Friday titled “Texas is a Red State” all but required me to add today’s posting as a corollary: Texas is Red but Dallas is Blue. I’m further compelled to finish the statement as a children's rhyme, “bunches of Democrats are in the county, what can you do?”

We Republicans live this reality every day. We’re strangers in a strange land. No, it wasn’t always this way, and it doesn’t have to remain this way, but it certainly is for now. Dallas County is one of the Democrat strongholds in Texas.

There are approximately 1.4-million registered voters in Dallas County. Currently, about 20% of them are Republicans and 46% of them are Democrats. The remainder, about 34%, are swing voters, also known as independents. If half of the swing votes break our way, we will still lose county-wide elections by 150,000 votes. This doesn’t require political calculus; it is just simple math; mechanics.

To be sure, as was demonstrated on November 8th, the sheer number of Democrats in Dallas County is a formidable group to overcome in county-wide elections. In the last year, they used their local power to strengthen their local advantages in redistricting (local gerrymandering) to solidify their power within the county. They are also organized and can turn out enough of their voters to handily win any county-wide race. They don’t have to worry about turnout as we do when their top line is so large.

In Dallas County, Republicans can win in Congressional districts and Senatorial districts, but the county-wide races such as for the Commissioners Court and Judges are races where the sheer numbers of Democrats are tough to overcome.

Republicans are the minority party in Dallas County; at least for now.

How Dallas and its Democrat dominance play into statewide politics require some context; a political geography lesson.

Yes, these four counties are Democrat-heavy, but there are not enough to win state races or break the dominance of Republican control of political power in Texas.

November 8th also provides a clear-cut example of how political geography and regionalism play out.

It would be a mistake to think that the four large Democratic urban enclaves control the state. They don’t even come close.

Yes, they are a powerful force, but Texas is a very big place and inherently conservative by nature. Even the big numbers the Democrats can run up in their urban enclaves cannot overcome the Republican base throughout Texas.

According to the Texas Tribune (https://apps.texastribune.org/features/2022/texas-2022-election-results), this is how the counties broke for Governor Abbott: 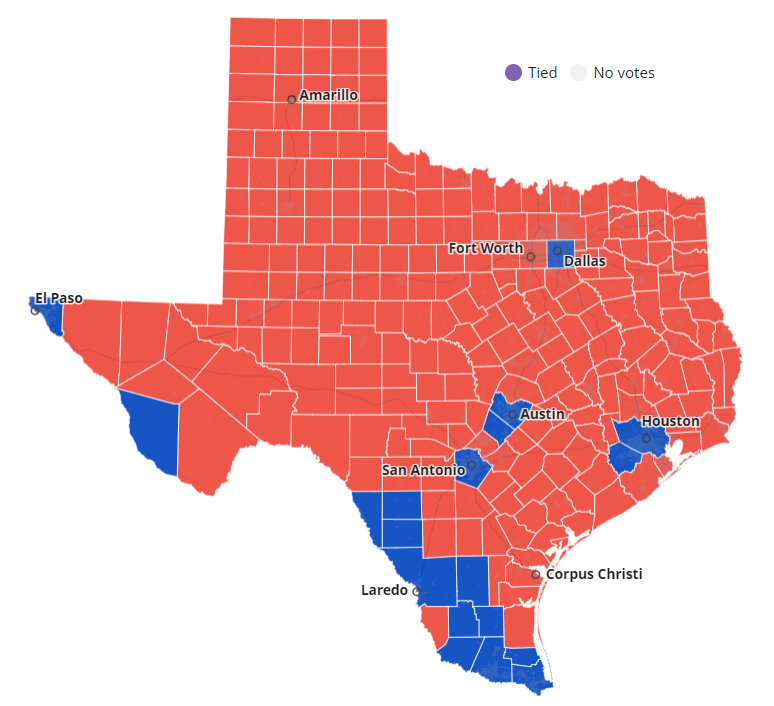 Beto took 20 counties out of 256 counties in Texas. That math won’t make you Governor. The Governor beat Beto by 11 points.

Expressed in their political regions, here is how Tuesday played out for Governor Abbott and Beto O’Rourke (also from the same Texas Tribune link cited above):

As far as how liberal Democrats fare in Texas as a whole, the results in the 2022 Governor’s race present a classic example. The Democrats run a very leftist candidate, and spend a ton of money (much of it from out-of-state liberal enclaves) but are decisively defeated.

One is almost tempted to say, “Here endth the lesson.” However, I am not nearly foolish enough to think for one minute that the Democrats have learned this lesson in basic political mechanics. They will surely keep running liberal politicians for state offices but will surely keep going down to defeat.

The Democrat elites in the Four Big Blue Counties have sway over who their Party runs in the State but they always fall victim to either their leftist ideological tests or a Chauvinistic Localism wherein they think what works in Dallas will surely work throughout the State. They think what plays well in a millionaire’s fund-raiser on Armstrong Parkway will sound good in the Ranchers Supply Store in Hereford. Sorry, boys and girls, it doesn’t. Hereford is the county seat of Deaf Smith County where Governor Abbott took almost 81% of last Tuesday’s votes.

No, we have not seen the last of leftist Democrats running for Governor of Texas, or any other of the State-wide races for that matter. They will keep setting them up and Texas will keep voting them down. The Democrats keep going the same things over and over, each time expecting a different outcome. Note to self: look up Einstein Insanity.

Dallas County is one of the Democrat strongholds in Texas; strongly held indeed, at least for now anyway. But who says that Democrats have a lock on Dallas County in perpetuity? Things change.

One of those things that changed has been the Dallas County Republican Party itself. We are re-inventing the energy by which we engage voters. We are re-committed to changing things in the County. During the last 15 months, we have revitalized the County Party and have spent over a year executing a plan to win. We are in the ascendency. No this won’t be easy to accomplish, and results won’t be immediate. But not to worry, we’re a tenacious bunch determined to take back Dallas County regardless of how long it takes. We’re also not afraid of the hard work that will be required. For over a year, we have had our sleeves rolled up going about the work.

What we’re going in Dallas can become a model for the other Big Blue Counties in Texas.

Back
Added by Chris.Milton


Democrats "keep running liberal politicians for state offices" because they know that, though they will lose, they will get a speaker of the house of their choosing. Yes, Democrats do the "same things over and over," but until we get a "No-Democrat-Chairs" Speaker of the House, we will still only get 20–25 percent of our legislative priorities in the upcoming session.


This past summer "True the Vote" identified over 85,000 registered voters in Dallas County with address issues (i.e. the USPS showed a different current address for the individual than the address shown by Dallas County Elections) with some discrepancies dating back years. All of these conflicted registrations were personally reviewed and confirmed in the "True the Vote" application. But it is not clear to me exactly how many of these conflicted registrations were presented to Dallas County and challenged. I personally submitted 1,000, the maximum "True the Vote" would allow based on the advice of legal counsel. The Dallas County GOP needs to follow up with True the Vote to determine the status of these 85k+ registered voters and ensure all are challenged and purged as appropriate. This could reduce the number of registered voters in the County by over 5% and help mitigate the potential for election fraud going forward. Such efforts must become a part of the annual effort of the Dallas County GOP, as the ERIC system certainly cannot be relied upon to clear up stale voter registration rolls.


Excellent analysis by Bill. Yes, we had very little success at the county level, but we did our part for the state and country as a whole. How many 100s and 1000s of yard signs did you see for Abbott, Patrick, Paxton, Van Duyne, Miller, Buckingham etc.? We gave the cause 100,000 of thousands of votes plus probably millions of dollars. I don't think you judge DCRP by the number of local elections we won, but what we contributed to the national and state cause. If we could close the gap 5-10% in 2024, that would be a huge success.

Everybody, including me, has been down since 11/8, but does anybody think the voters will be happier after two more years of Bidenism? Is he going to start drilling more? Are liberal DAs going to start locking up criminals or let more out of jail? Is the government going to quit spending so much money (lower inflation)? Back down on Drag Queen Story Hour or grooming students? Double down on the economy crushing Green New Deal? The answer is pretty much a BIG FAT NO.

I have only been in the DCRP for a few years, but I feel we have a great management team. We need to keep plugging and support the local, state and national cause.


I applaud your determination.

Money and highly qualified candidates combined with determination should be a winning combo.

The Democrats hold a "pitch-'till-you-win" philosophy.


BOYLAN.DANIEL.J - the DCRP operates its own very large Election Integrity effort which we fund through our limited resources. However, like all of the efforts like this, it can be expensive and we simply don't have a sufficient budget to do the follow-up to fulfill the proof DCED requires to remove the voter from the Voter File. Removing dead people is relatively easy and easy to prove. But others can be complex and even require employing an investigator. We haven't found a donor willing to fund the effort.

Also, if it is just an address change, the DCED has to operate under state and federal laws about the removal of a record. This adds to the complexity and cost.

Simply to see if the 85k+ have been removed can be checked by you (or True the Vote) through the Dallas County Voter file. It is a public record and you can by filing a FOIA request and about $20.00 in processing costs typically within four days of submitting the FOIA. The file contains the full registered voter list.

We are working on a new strategy and plan to implement new approaches in December. Please stay tuned.


BILL UNDERHILL - Yes, we can do it. It is being done in other places. Would you have thought that Dade County in Florida could be flipped Red? We simply have to do the work and improve every election cycle.


Are we sure all of these Democrat voters/ supporters are even alive?


SABRINAGILLMAN1 - it is the stuff of legends. The old joke goes, "My grandfather voted Republican until the day he died.
He's been voting Democrat ever since!"

In reality, our Election Integrity Committee actively works to monitor the voter roles. Yes, we wish we had the budget to do more but there is an organized effort. The voter roster in Dallas is relatively clean of dead people and the Texas SOS effort to inform county officials of deceased people occurs regularly. The Dallas County Voter File is 1.4-million records and in such a large database there will always be a few that go undetected. But, Dallas County's records are cleaner than most. No, not perfect but not nearly as bad as some large metro areas. We are working on new strategies and tactics to make the situation better. Some will be implemented shortly.

It would be a tactical and strategic error for us to attribute Democrat dominance in Dallas County to solely over-inflated voting rosters. That is too easy (and inaccurate.) The Democrats are alive, among us and voting!

Yes, we remain vigilant in our Election Integrity efforts but we also MUST register and organize more Republican voters in Dallas County. We must reach more swing/non-aligned voters and convince them to vote Republican.