"To the People of Texas

and all Americans in the world."

Preserving the Honor Handed Down To All Texans

Republicans are, by default, tasked with keeping the State of Texas led by those with morals such as William Barrett Travis, lest he and the others who gave their lives to preserve Texas die in vain. Texas is the only State able to fly its flag at equal stature as the United States Flag, as it was the Republic of Texas before becoming a state. Democrats are determined to tear apart the very fabric of that which made men such as William Barrett Travis pass their torch of freedom on to us, to cherish and protect for the generations to follow. If we lose Texas, we lose our entire United States of America. Therefore, as Travis issued the call to come to the aid of the brave men at the Alamo Mission in what is now downtown San Antonio, Texas, we here in Dallas County issue a call to use the most effective weapon we have:  For every single one of us to deliver our votes to restore Dallas County to the rule of law, fiscal responsibility,  fair elections and respect for all of the residents of Dallas County.

Perhaps the most important document in Texas, certainly the most revered, is the letter written by Lt. Col. William Barret Travis during the siege of the Alamo. On February 24, 1836, the second day of the siege, Travis wrote this appeal for reinforcements through this heroic message. Addressed to the town of San Felipe de Austin and intended for the Citizens Council there.

Signed "Victory or Death," the letter is renowned as a "declaration of defiance" (Dick Stanley, Austin American Statesman) in overwhelming circumstances and patriotism, pledging one's life and honor for deeply-held beliefs and country.

Transcript of the Travis Letter

Send this to San Felipe by Express
night & day

The People of Texas
and
All Americans

Fellow citizens & compatriots—
I am besieged, by a thousand
or more of the Mexicans under
Santa Anna—I have sustained
a continual Bombardment &
cannonade for 24 hours &
have not lost a man—The enemy
has demanded a surrender at
discretion, otherwise, the garrison
are to be put to the sword, if
the fort is taken—I have answered
the demand with a cannon
shot, & our flag still waves
proudly from the walls—I
shall never surrender or retreat
Then, I call on you in the
name of Liberty, of patriotism &
everything dear to the American
character, to come to our aid,
with all dispatch—The enemy is
receiving reinforcements daily &
will no doubt increase to three or
four thousand in four or five days.
If this call is neglected, I am deter-
mined to sustain myself as long as
possible & die like a soldier
who never forgets what is due to
his own honor & that of his
country— Victory or Death

P.S. The Lord is on our side—
When the enemy appeared in sight
we had not three bushels of corn—
We have since found in deserted
houses 80 or 90 bushels & got into
the walls 20 or 30 head of Beeves—

Upon the command of Travis, the historic Travis Letter was carried from the Alamo by Gonzales Mounted Ranger Captain Albert Martin, acting as a courier. Martin departed the Alamo on orders on February 24, 1836. On the afternoon of February 25th, Martin passed the dispatch to Private Lancelot Smither, who had met up with Martin in Gonzales. Smither had been ordered by Travis on February 23 to scout the enemy positions and provide Gonzales with an estimate of the growing strength of the Mexican troops. After meeting to pass along the letter but before Smither departed, both Martin and Smither added their own postscripts to Travis's letter.

On the evening of February 25th, in bad weather and icy wind, Smither departed for San Felipe. Private Smither dutifully delivered the Travis Letter to the San Filipe de Austin Citizen Council after a hard ride of fewer than 40 hours.

Col. Almonte is there the troops are
under the Command of Gen. Seisma

Smither uses "NB" in the opening of his addition to the letter which stands for "Nota Bene," an older Latin form for "mark well," the equivalent of saying "Important!" It was used in place of "PS" which, of course, means "Postscript". The use of NB was Smither's way of saying "pay attention." Private Smither was a common man and not well educated. But, his personal note was all the more powerful for it.

Immediate Results of the Letter

A company of Texas Rangers in Gonzales immediately answered Travis's call for reinforcements, departing Gonzales (the first brief stop for the letter) and riding to San Antonio (about 70 miles away) on February 27th. A total of 32 men composed of Rangers and others riding with them, entered the Alamo on March 1. The group from Gonzales included Travis's courier Captain Albert Martin who, to his eternal honor, returned to the Alamo to rejoin his compatriots in time for the final battle where he died. This group was the only reinforcement Travis would receive.

Transcripts of the Travis Letter began to appear in newspapers and printed as broadsheets as early as March 2nd. Men from Texas and the United States began to gather in Gonzales to relieve the Alamo but time ran out. Many of these became part of the army of Sam Houston who would later defeat Santa Ana at the Battle of San Jacinto on April 25, 1836, using the battle cry, "Remember the Alamo" and "Remember Goliad."

By 6:30 a.m. on March 6, 1836, the battle for the Alamo was over. All of the Alamo remaining defenders were killed. Their sacrifice bought much-needed time for Sam Houston to form and train his army, implement his strategy for his plan of engagement called the "Runaway Scrape" which led to its final battle at San Jacinto 50 days later. Houston routed Santa Ana's army and traded the generalissimo's s life for Texas. 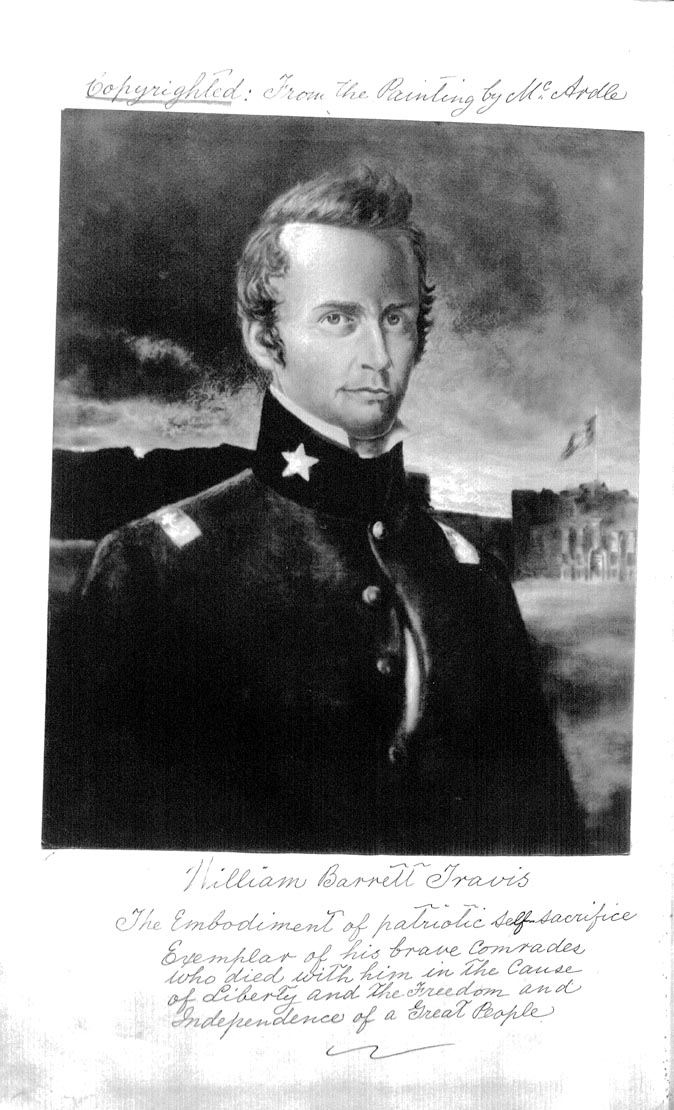 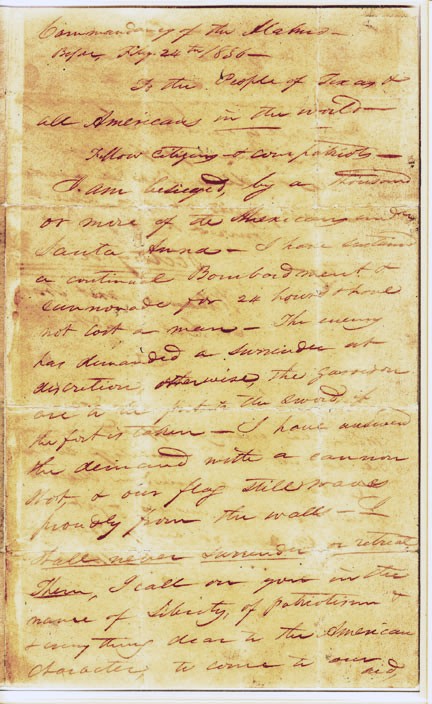